Several years ago (OK, so it was many years ago!) there was a TV commercial for some brand of ketchup.  The visual was a hamburger with a bottle of the red stuff poised  to pour over it.  The ketchup was moving ve-ry sloooow-ly as somebody sang Carly Simon’s “Anticipation!”  The point was that the best things in life (including ketchup, apparently) are worth waiting for and appreciated more when we look forward to them.  It’s a philosophy that most humans try to espouse — even if not over ketchup.  Dogs don’t!

Dogs aren’t really into savoring the moment.  Dogs want to get from A to B as fast as possible — and are always looking for short-cut C!  So they commonly produce an activity labeled “anticipation” by dog trainers, but utilizing an alternate meaning of the word: to act in advance.

Just like the know-it-all who interrupts mid-sentence with smug expectancy of what you’re going to say, dogs take a pinch of previous experience and jump to conclusions!  When I was a kid, we had a GSD who, upon seeing anyone pick up a treat, would Sit, Offer a Paw, Lie Down, flop over in a Dead Dog, Roll Over, then pop back up and grin in expectation of her reward.  She’d do all this without a cue being spoken and faster than it took me to type it all.

Yes, it was very cute, and yes, she was a very smart dog.  However, this wasn’t necessarily a display of her “smarts,” just a dog’s impatience to cut to the chase.  (It also displayed a defect in the way we trained her — always asking for behaviors in the same order, but that’s another subject…) All dogs do this sort of thing.  Once they make the connection between Behaviors (A) and Rewards (B) they want to get there as quick as they can and so THROW a behavior (one or more) out there, hoping they’ve guessed right and that will be the Shortcut (C) that gets them to their desired goal.

Another way of looking at it is Fifi considers her owner to be sort of a Vending Machine stocked with Doggie Treats.  So, when Fifi wants one, she starts doing her tricks, hoping that one of them will push the right button to make a treat drop.  This works pretty well for Fifi!  It’s soooo cute and it makes us laugh and because the dog has “worked” for it, we give her the treat.

Unfortunately, this makes Fifi less inclined to listen for a cue the next time!  Yet, it’s amazingly easy to persuade Fifi to listen.  First, we have to stop rewarding behavior we didn’t ask for.  Yes the dog “worked” but if your employee shredded a document instead of filing it, you wouldn’t reward him, would you?  So, if your dog SITS when you were going to ask for a DOWN, she shouldn’t get a treat.  Even if she SITS before you were going to ask for a SIT, she can’t really read your mind and still shouldn’t be rewarded.  Reward obedience, not just behavior.

Instead, no matter what trick Fifi “throws” at you, ask for a DIFFERENT one.  If she keeps on trying one behavior after another without listening, simply turn away.  With your back to her, wait for 10-15 seconds.  By doing this you are taking 1) your attention, 2) the treats, and 3) the opportunity to earn those treats away!  The Vending Machine’s buttons have left the building! That will make Fifi feel like listening!  If she scoots around to face you, simply keep turning your back until the 15 seconds is up, then turn around and try again.

For most dogs, this does the trick.  It’s like magic!  Fifi suddenly concentrates on what you’re SAYING because you’ve taken away the rewards of guessing — i.e. the short-cut!  You may have to repeat the turning-away trick several times, even in the same training session.  Certainly, you’ll need to do it every once in a while in different training sessions.  Sometimes the smarter the dog and the more willing to work, the more they try to anticipate, especially if we aren’t going fast enough for them.

Anticipation occurs all the time with dogs.  Move her leash from the counter to its proper hook next to the door and Fifi frolics, clearly expecting a walk!  Looking through your purse jingles the car keys and Fifi runs in her crate with sad, reproachful eyes.  Dogs cope with their world by being able to predict what’s going to happen.  They learn that A happens before B and jump to conclusion C.  Most times, as in these examples, Fifi’s reactions are cute and harmless.  The only time ANTICIPATION becomes a problem is when we undercut our own authority by rewarding Fifi for behavior we didn’t ask her to do.

Do Dogs Resemble Their Owners? 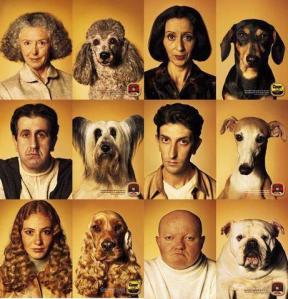 There’s an old story that Winston Churchill, with his pugnacious glare and jowly face, greatly resembled his pet bulldog.  Love that story, and ole Winston certainly looked like a two-legged bulldog, didn’t he?  Unfortunately, that is just a story.  Though some member-or-other of his family did own a bulldog, Mr. Churchill’s own personal pet was a poodle.

Maybe the Prime Minister and his poodle are the exception that proves the rule?  We certainly have all noticed how many people do resemble the family dog.  I don’t know if the illustrations in the picture here are the real owners with their pets; I suspect these are staged shots.  However, there has been some research on this subject.  The studies show a greater-than-chance correlation between owner of dogs with upstanding vs. hanging-down ears and owners who wear their hair shorter-than or pulled behind their ears vs. hanging down over them!  Though I could site many examples of how owners and dogs resemble each other physically, what I really notice is how often dogs resemble their owners in temperament!

Scientists mostly agree these days that personality is influenced by both nature and nurture.  Obviously, some puppies are shy and others outgoing right from day one, so your pet has some “pre-programming.”  However, most dog trainers will tell you that what the owner feels travels “right down the leash” and creates a similar state in their dog.  So, a nervous dog will most often have a nervous owner.

Dogs really do imitate their owners in this way.  Dogs are very good at adapting to circumstances and looking to people for cues of how to behave.  Though dogs and wolves share practically the same DNA and wolves have better problem-solving skills, studies show dogs far outpace wolves in any test which involves reading humans and working with them.  In fact, dogs are the ONLY animal capable of something that seems very simple to us:  following a pointing finger.   Wolves can’t.  Chimpanzees, our closest relatives, can’t!  But the domestic dog has been selectively bred for some 40,000 years plus to be our best friends and follow our cues.

So, whether we bring a puppy or an adult dog into the family, this is a new situation — a new “pack” — for the dog.  The dog will look to the humans as the established member(s) of the pack for clues of how to behave; what is dangerous, what is good, what is frightening, etc. We don’t have to say anything. Dogs can hear the human heartbeat speed up and respiration quicken.  They can smell the biological changes in our bodies that come with anger and fear.  So, it isn’t really surprising that a dog living in a household of humans who are “on edge” all the time will learn to view the world as full of suspicious things and situations and be nervous, too!

So, does that mean I think my dog Kita “caught” all her neuroses (she’s afraid of the refrigerator, and thunder), suspicions (she assumes anyone new is up to no good), and anxieties (she can’t bear to be left alone for long) from me?  No, I don’t hold myself responsible for ALL of her hangups;  she came with a lot of them full-blown!  However, before Kita came into my life, I wouldn’t have said I was a nervous, suspicious or anxious person.  Watching how my reactions make Kita’s natural tendencies worse, I have identified that I need to consciously relax and be calm to help her.  Just taking deep, slow breaths helps both of us.  So does deliberately speaking in a low-pitched, low-volume, slow manner.  Whenever I see Kita getting out of control, I realize that my own control is slipping and know I need to stop reacting and start being pro-actively calm.  Dogs may not be our furry twins, but they are furry mirrors!

Trainers have a saying, “A tired dog is a good dog.”  I like to add “and a happy dog!”  Between our busy schedules, the weather and our own tiredness, it’s often hard to tire out our puppies!

Take today, for instance.  I think the temp has finally creeped up to about 14 degrees, with the wind-chill it’s only about 6 degrees.  Not the kind of day I really want to take Kita for a walk.  SHE loves this weather, and gets positively puppy-fied and eager to play when she feels the frost.  I, on the other hand, get cold even thinking out going out in this weather.  However, that’s another part of the pact we make when bringing a dog into our homes — to give them what they need including exercise.

I’ve heard a lot of clients say their dog gets lots of exercise because they have a fenced-in yard.  Unfortunately, dogs are just as unmotivated as we humans when it comes to exercising themselves.  Unless they have a playmate — another dog to wrestle and chase, or a human to throw a ball — they pretty much just meander around, sniff a bit, eliminate as needed and call it done.

If the dog is a small one, playing fetch and tug or having two people alternately call her from opposite sides of the house can give a pretty good workout on yucky-weather days.  However, this would only be a drop in the bucket for a 90-lb GSD.

Oddly enough, the exercise might not have to be physical.  Dr. Patricia McConnell (who I think lives in Minnesota, or some other truly frigid state) finds that 20 minutes of obedience/trick training provides a good alternative to working the sheep for her Border Collies.  She says they’ll happily curl up and take a nap afterwards.   Exercising those mental muscles tires them out just fine.

This really seems to work.  Kita and the dogs who board and come here for daycare seem happy with a few mental challenges on truly awful days.  Now, that wouldn’t be a good idea to try everyday.  Our dogs need that cardio-vascular workout!  And so do their humans! That’s why I made myself bundle up like Charlie Brown in his Christmas special and head out into the face of the wind with Kita today.  OK, so it was a slightly shorter walk than usual, and Kita could have gone on a lot longer, but I didn’t get frostbite and Kita curled right up and took a nap afterwards.  A tired dog is a happy dog!