You Get What You “Pay” For 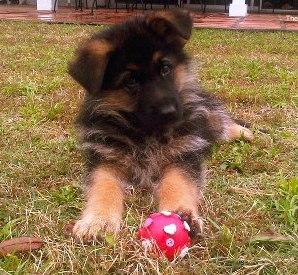 (Thanks to the German Shepherd Dog Community for this cute pic!)

One subject that inevitably comes up when talking “dog” with anyone, anywhere, are those dogs that LOVE to chase a ball, stick, or Frisbee, but a) won’t bring it back, b) try to morph into TUG the instant a human lays a finger on it, c) seize the opportunity to turn FETCH into KEEP AWAY, or d) spit the object out at the human’s feet before he can take it. Actually, I’m always envious of folks with ANY of the above issues because it means their dog will at least FETCH to some degree.  Both of my GSDs, though with HIGH prey drives, preferred to chase live, furry things and seemed to think I was trying to trick them somehow with balls and Frisbees.  (You want me to do what….?)

Having lots of different dogs come to stay at DRAMA DOG TRAINING for the day or week, I’ve seen many dogs exhibiting one or more of the four issues above.  In all cases, it only took a little persuasion to convince them to play by my rules.  You see, dogs are smart!  If they can get us to play THEIR game THEIR way, then why shouldn’t they?  The pay-off for the dog, as always, is how much attention they get!  We reap the behavior we feed with the most attention – and doggie doesn’t care if we’re happy or upset as long as doggie’s getting our focus.

Consider the dog that just won’t bring the ball back.  One might think that Tucker isn’t getting to play FETCH much at all if he runs off with the ball, but who says that’s the game he wants to play?  If he runs and grabs the ball – it becomes HIS!  “Nyah, nyah!  It’s my ball and you can’t have it!” Tucker  seems to taunt as he’s dashing about the yard; a doggie grin plastered on his face!  I guarantee if you turn your back or start go in the house he’ll probably deflate like a pricked balloon.  If you don’t care he has the ball and are taking away your attention and company, most dogs will drop the toy to run after you, or bring it along (forgotten) in his mouth.  Even if Tucker DOESN’T, his fun is over because you’re not there to gloat over any more.  After a few repetitions, he’ll be looking for a game that’s more fun and FETCH might have a chance, after all!

Most dogs that instantly morph into a game of TUG have been taught to do that by their human!  We don’t MEAN to, but we do!   Joey brings the stick right back and you grab it.  Joey hasn’t been taught what “Drop it” means, so you pull on the stick trying to get it out of his mouth to throw it again.  You ARE playing FETCH, right?  Not after you’ve started TUGGING, you’re not!  That turns it into a brand new game with new rules – and you started it!  Can’t blame Joey if he joins in!  Or if ever after he thinks the two games should alternate.  HE Fetches and then YOU Tug!  That sounds fair, doesn’t it?  Not so much from our point of view!

So, when Joey tries to pull, decline to reciprocate!  You can let go of the stick, or move along with him as he TUGS.  The idea is you’re going to wait him out — until HE releases the stick.  You can wait until he drops it on his own.  As he it leaves his mouth, say, “Drop it! YES!” then pick up the stick and throw it.  If you keep hold of the stick, watch as he’s chomping to shift his grip.  When his jaws release the stick, suddenly pull it out of his mouth, saying “Out! YES!” and throw the stick.  In either case, Joey is learning a new CUE and you’re not being trapped into playing TUG!

It’s no wonder so many dogs return the Frisbee only to keep it just out of our reach.  KEEP AWAY is the game voted most-fun-to-play by 9 out of 10 dogs of all sizes, ages and breeds.  Ringo’s reactions are so much faster than ours that he gets a good doggie giggle at our fumbling attempts to grab the Frisbee.  “Sucker! You’ll never get it!”  And that’s true.  A human’s chance at winning the KEEP-AWAY game are pretty slim!

SO DON’T PLAY THAT GAME!  Instead, play FETCH with TWO objects that Ringo likes equally well.  As he’s bringing back the first one, hold up the second and waggle it enticingly.  Most dogs will drop the first without a second thought as they focus on the one in YOUR hand – that you of course THROW to keep the game of FETCH going.  Pick up the first toy as Ringo runs off, and you’ll stay in business!

I honestly used to wonder a bit at folks who thought D was a PROBLEM.  A dog that returns and spits the FETCH object out without being asked or coaxed!  Isn’t that what we WANT? But then, I encountered a high-drive Australian Shepherd!   Cooper was so intent on getting ready to go after the re-thrown ball that he would dash up, dropping the ball somewhere in my vicinity as the ran half-way out in the yard to wait for the next toss.  Stooping over to pick up a ball once or twice isn’t hard, but after 50 repetitions, it gets old.  So I refused to pick it up!

Actually, that was the final step.  The intermediate steps involved not picking up a ball that was dropped further away than the previous time.  Then I only picked up balls that were CLOSER to me, until it was consistently left at my feet.  You see, I’d only throw the ball AFTER I picked it up, so if it was too far away and I was just standing there, Cooper couldn’t stand it and would move it a little closer!  (Ha-ha!  All according to my fiendish plan! ) Finally, when Cooper was bringing the ball right to me, I’d point to the ball on the ground and say, “Gimme the ball!” and WAIT!  Cooper would get so frustrated at my stupidity that he’d pick it up and nudge my hand with it.  Grabbing it, I’d say “YES!” and throw the ball as the reward.  It only took a couple of days for Cooper to learn MY rules! That the ball got thrown again much QUICKER if he put it in my hand!

It is temporarily a bit costly in terms of time and effort to enforce OUR rules, but if we let THE DOG dictate the game, we can expect to be frustrated for the life of the dog.  The dog is out for maximum amusement and it will probably be at our expense, not its own!  The truth is that dogs will play WHATEVER “game” you play WITH them.  You’ll always get the results you’ve earned with your attention. In dog play as well as dog obedience — you get what you pay for!