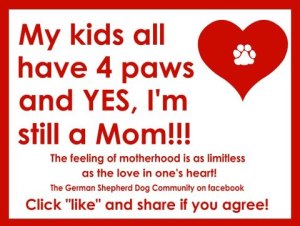 This picture was posted for a (very) short time on FB today. By the time I saw it and tried to comment, it had been “retracted” probably due to some negative comments. I found it fascinating that the only folks objecting were male. Actually, I think that’s pretty significant, especially since the women who posted something all agreed and had some anecdote to share about how true it was in their own lives.

One man posted, “sorry dog owner isnt a mother people.” Though his lack of punctuation makes his exact meaning imprecise, I don’t think he was apologizing to the dog owners reading it. Another fellow had this to say — “No wonder the world is a mess. Comparing motherhood to owning a dog. That’s actually quite sick.” No wondering about what HE means, is there?

Isn’t it INTERESTING how both used some conjugation of the verb “to own?” Probably it was in reaction to the language in the picture, but I’m sure it was also a deliberate strategy to underscore their points. Emphasizing that word says a lot about how they view the world.

You can only “own” property — THINGS. To call something ALIVE “property” means you regard those living being as things, too. According to law, animals — even household pets — are still listed as property. The US military still classifies Military Working Dogs as “equipment.”  However the soldiers who work with the dogs regard them as partners and fellow warriors. Most folks who share their home with an animal usually regard and speak of them as members of the family. I would imagine these two guys are not among those “most folks.”

As men, they can never be mothers, themselves, so they can’t be objecting to the lady’s posting on that basis. At first glance it seems that the two “gentlemen” are standing up for the women in their lives.  I wish I could believe that’s all that’s going down.  Their reactions are not objective disagreements with the etymology of the word “motherhood.”  No, their comments are coming from gut-reactions and that means emotions which are connected to core beliefs.  No 21st century American would openly talk of owning his wife or kids, but it wouldn’t surprise me if they truly, deep down, consider the women and children in their lives as being extensions of themselves.

Didn’t mean to get so far off my usual “doggie” topics, here.   It just struck me that if these guys considered that post to smirch the beauty and sanctity of motherhood, then they must have pretty low opinions of dogs – as property.  Perhaps they were offended that a human woman would WANT to “mother” a beast. They certainly showed that they considered the opinion put forth in the picture to be just plain wrong for society as a whole!

I’m sorry for those men and anyone else who objects to this post, and here’s why – YOU ARE MISSING THE POINT!  The point is that not having biological (or adopted human) children of one’s own does not mean that a woman has no “motherlove.”  Nor does it mean she puts it a box and buries it!  She instead lavishes that nurturing spirit on others, including her “pets.”  She is not denying children anything.  She is not cheapening a mother’s love (or father’s) for their own children.  “Mothering” a dog or cat just means a woman’s heart is too big to restrict her caring to her own species.  Out of empathy, she cares for an animal without expectation of gaining anything in return.  And isn’t that what being a mother is all about?  Grow some empathy, guys!  It’s LACK of it that’s the reason the world is in such a mess, not because women call their 4-pawed pet, “kids!”

2 responses to “Mothers and Four-pawed Kids”